skip to main | skip to sidebar

This should be in a Tom Wolfe novel, it is so:

1) stereotypical
2) obviously stupid and vapid and vacuous and self referential
3) beyond satire but true, both factually and poetically

The Boomer Political Establishment was so busy trying to square the circle of being pro free speech, (after decades in power enacting hate crime laws and speech codes on college campuses), pro free expression, (after liberating Larry Flint and liberating sexuality in the 60s only to get jobs creating touching rules and intimacy regulations once they became Deans, sorry Millenials, No Free Love For You!… etcetera, etcetera, etcetera as the King of Siam once said ); so busy squaring an ideology of “let’s invade the world, and at the same time invite the world here!” with “Tolerance!”


“Look, Diversity is Strength(TM)! Once Third World folks from Iron Age cultures come here and begin to shop at Malls and watch Lena Dunham, they won’t cling to centuries of religious beliefs, they won’t cling to a tribal retribution culture when their religion is blasphemed. They will be full of drole irony and sarcasm towards the sacred. Their Sacred, sorry. There is no Sacred, as there is no God, only your God, and your Sacred. It took the Irish four generations in America to come around, surely the Algerians can be culturally lobotomized in three!"

Sorry, I was laughing to myself as I realized all those Boomer taught literature and history courses, and HR training sessions, about the Power Structure Manifestations via construction of “The Other”… and they, in such a Freudian fashion, have constructed such an “Otherness” for everyone else with the simple word “your”.

Your Truth
Your Opinion
Your God
Your Emotional Reality... (are all so adorable but I have Tenure and I hold the Megaphone)

Anyway, the Boomer Rulers forgot to send anyone of appropriate hegemonic authority to the “Holy Crap The People We Invited in to Disrupt and Displace the Native Population Killed the Cartoonists that Mocked the Native Traditions as Well as the Traditions of the Newcomers, But the Native French Catholics Never Fight Back Like This –oh Merde I really Hope the Vendee is at Mass and did not see the Holy Trinity Cover of Charlie Hebdo” rally in Paris.

And there was some sniping among the Boomer Opinion Class about this oversight and some Boomer said, “I know! I have the answer! They may hate us and our policies but they love our culture. Send over James Taylor! Because it’s still NineteenSixtywhateverthefuck!”

I imagine that she or he also thought, “We should send Coke and Levis too! Because when I was on my Rhodes Scholarship four decades ago, they loved that stuff.”

James Taylor and an acoustic guitar. Unfuckingbelievable. You are a generation of children who now have nukes...
Posted by Magister Ludi at 9:42 PM No comments:

Get the Shaft, Call it a Movement, Part II

Shipping container apartment being erected in Washington this week
The project raises questions about affordablehousing.

Why would young, college educated folks have to live in shipping containers in the nation's capital?
Millennials consider leaving Washington as the city becomes more costly
Sorry, you cannot inherit your nation kids...

Posted by Magister Ludi at 11:53 AM No comments:

The Congressional Budget Office (CBO) has issued its Long-Term Budget Outlook for 2014. Compared to previous reports, it projects a slightly worse outlook for the nation’s fiscal situation, which results from the CBO’s new assessment that the U.S. economy’s potential for stronger economic growth in the future is lacking. 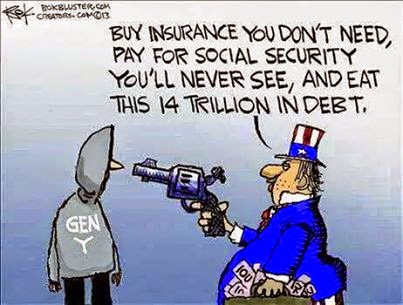 Posted by Magister Ludi at 7:29 AM No comments:

Get the Shaft, Call It a Movement

On of the character traits of a Reactive generation is to begin the recovery from a Crisis through practical consideration of the situation and self-sacrifice for the coming generation.

Generation X, or the 13th Generation, was left holding the bag of the Baby Boomer's decadence -be it sexual decadence, economic decadence, cultural decadence (can we get another Beatles anniversary?), or entitlement decadence (yeah, we know Social Security won't be there for us).

The McMansion bubble is another unsustainable legacy of the Boomers.  Isolation on a cul-de-sac in a house too big to be practical.

Of course there is a next generation reaction to this: The Tiny House Movement.  It's practical, sustainable, and anti-materialist, though as a movement it fetishizes the poor economic situation inherited from Boomer leadership of the country.  Whatever you gotta do to rationalize your situation I guess.

Mitchell became intrigued by the idea of a condensed living space five years ago after he lost his job, so he decided to sponsor the Tiny House Conference in Charlotte in 2014.
Mitchell has now found another way to cater to the Tiny Movement crowd. He runs thetinylife.com website which chronicles his efforts to build his own structure and provides tips and resources for others.
"It's doable, you know, and it's all about a lifestyle change and a shift in what's important in your life," said Teal Brown, Wishbone Tiny Homes.
Plenty of others have discovered tiny houses and there are an estimated 4,000 of them now in the U.S.
"I looked at my budget and I realized that housing was a lot of that cost and that's when I found tiny houses," said Mitchell.
- See more at: http://charlotte.twcnews.com/content/news/around_carolina/706979/popularity-of-tiny-homes-on-the-rise#sthash.w09U6yRu.dpuf

If the Boomers sought to throw off all previous constraints of civilizational habits and morals and "Start from Zero", as Tom Wolfe documents, the Xers will reboot on their own in a practical way, in order to maintain some sort of civilizational continuity.

Tom Wolfe on The Start From Zero, and anticipating what is happening now- The Great Relearning:


In 1968, in San Francisco, I came across a curious footnote to the hippie movement. At the Haight-Ashbury Free Clinic, there were doctors treating diseases no living doctor had ever encountered before, diseases that had disappeared so long ago they had never even picked up Latin names, diseases such as the mange, the grunge, the itch, the twitch, the thrush, the scroff, the rot. And how was it that they now returned? It had to do with the fact that thousands of young men and women had migrated to San Francisco to live communally in what I think history will record as one of the most extraordinary religious fevers of all time.
The hippies sought nothing less than to sweep aside all codes and restraints of the past and start from zero. At one point, the novelist Ken Kesey, leader of a commune called the Merry Pranksters, organized a pilgrimage to Stonehenge with the idea of returning to Anglo-Saxon’s point zero, which he figured was Stonehenge, and heading out all over again to do it better. Among the codes and restraints that people in the communes swept aside–quite purposely–were those that said you shouldn’t use other people’s toothbrushes or sleep on other people’s mattresses without changing the sheets, or as was more likely, without using any sheets at all, or that you and five other people shouldn’t drink from the same bottle of Shasta or take tokes from the same cigarette. And now, in 1968, they were relearning…the laws of hygiene…by getting the mange, the grunge, the itch, the twitch, the thrush, the scroff, the rot.
This process, namely the relearning–following a Promethean and unprecedented start from zero–seems to me to be the leitmotif of the twenty-first century in America.

Sorry for Losing your Wars for you Baby Boomers

An NBC news story about "Generation ME" decrying the self-absorption and short-sighted consumerism of the young "Millenial" generation was followed by an Ameritrade ad splicing shots of the 60s and a Boomer couple retiring in the southwest. Besides the fact that the ad's nostalgic take on the 6os seemed to equate the transcendent importance of screaming at the sight of the Beatles in Shea stadium with marching in Selma, growing long hair, smoking a joint and not bathing, what was really disturbing was the self-congratulatory assertion that this generation had "changed everything" and so their financial planning should be just as cool as they were... once.

The Helots were the enslaved people on whom the Ancient Spartans relied so that they could devote themselves full-time to military training. Others created wealth so they could serve the god of War. It seems that in the 20th century the two generations most assured of their greatness -the G.I.s who "saved the world from evil", and the Boomers who made perpetual adolescence a philosophical movement- have voted themselves a leisurely retirement, not to be paid for by slaves, but by their descendents. In the 21st century, retiring on the backs of the youth, it seems that the Boomers will serve the god Bacchus. Generational Helots tries to explore this dynamic...

Idealist - Visionaries, can be virtuous mentors or vicious totalitarians imposing their vision. Concerned with spiritual or moral issues. (Missionary, 1860-62; Baby-Boomers 1943-60) Reactive - Practical. Can be the able generals implementing vision of elders, or can be cynical and mistrutful of visionary utopias. (Lost 1883-1900, Generation-X 1961-81) Civic- Group oriented, community minded. Can come together to create virtuous communities of voluntary cooperation or a vicious, blind herd following a demagogue. (G.I.s 1900-24; Millenials, 1982-2000) Adaptive - Humane. When the Civics build and establish institutions, Adaptives tend to be overshadowed but try to make those institutions more human and personal. Can also become "tired" and lead younger Idealists in revolt against institutions of Civics. (Silent 1925-42; New Adaptive, 2001-?)